Hello there and let me begin by wishing you all a very happy New Year.  A touch late I know but I better late than never.  In honesty though, I've been a little absent over the last month as I took the festive period to truly unwind and spend quality time with friends and family, as I hope did all of you.

Not to worry though, with all that relaxation I had plenty of time to enjoy a lot of all things whisky and have plenty to be writing about as we move swiftly through the first month of 2015.  Furthermore I fully intend to crank this whole blog up a notch or two and look forward to expanding and pushing myself on to bigger things.

For now though I'll jump straight in with something new and Irish.

Roughly this time last year I typed out a review highlighting a latest release from The Celtic Whiskey Shop, which is based in Dublin City Centre.  That review looked at a bottling from their very exciting "Celtic Cask" range - the Celtic Cask Sé.

To recap the Celtic Cask Sé was a 22 year old, single malt whiskey that was born in September 1991 and bottled in November 2013.  It was double distilled and came from from an unnamed distillery that normally practices triple distillation.  The cask, number 1916, came to the company courtesy of the increasingly awesome Teeling Whiskey Company and was finished, for about 4 months, in one of their Anima Negra wine casks.  It was bottled at 46% ABV and another interesting note was that the initial spirit had been distilled from crystal malt, which is more commonly used in brewing to add colour and body to ales. 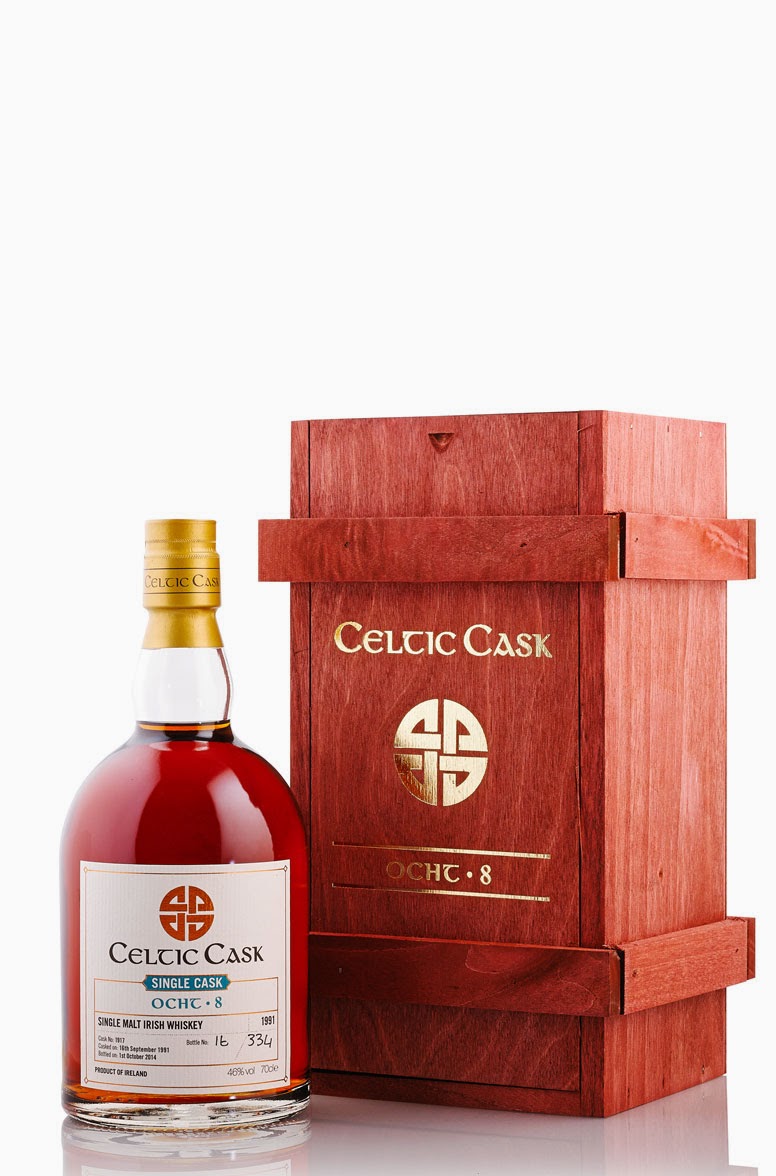 Back then I suggested that the spirit itself came from Bushmills but now I'm completely certain.

Further information provided, for the anoraks amongst you, told us that the cask was 225 litres, made from French Alier oak and the wine, it held previously, was in the barrel for 20 months.

When I received this sample I did wonder how much more influence the extra year was going to put into the whiskey and I looked forward to getting stuck in as I had really enjoyed the Celtic Cask Sé.

Without further ado here's my notes:

Nose - Deep red and black fruits, blackcurrant, strawberry and redcurrant.  There's a lovely buttered nuttiness running through this which is creamier than I recall in the Sé.  Ripe banana and Christmas spices.  Some menthol and a hint of peppermint.  Deep dark chocolate orange.  In the background you do get a slight sense of age with some dusty citrus lemon and orange coming through.

Palate - As with the Sé, this is a huge juicy arrival.  Tons of rich red fruits which are extra sweet with the malt.  Light clove spice and some red apple.  Dusty leather comes towards the end with rich orange.  Drying towards the very end with more creaminess throughout.

Overall this is still a big red fruit beast of a dram!!  Fantastic berry flavours run throughout this whiskey as it has clearly taken to the cask extremely well.  The Ocht for me is every bit as good as the Sé and then some.  What I found surprising with the Ocht is that it displayed a layer of creaminess, that wasn't obviously apparent to myself in the Sé, and this has easily added an extra dimension to the whole experience.

As with the Sé this is not a heavy sherried style whiskey but is beautifully light and fresh for 23 years of age.  The Bushmills spirit works wonderfully when treated with the respect it deserves........COME ON BUSHMILLS, SORT YOURSELVES OUT!!!

Yet again the Celtic Whiskey Shop have pulled out all the stops to bring us high quality Irish whiskey that's been finished to high, high standard!!

Well there you have it, the first review of what promises to be a fantastic and exciting year.  I hope you all stick with me for the journey.

As always I've thrown in a few relevant links below for you to peruse at your leisure and if you fancy another look at my review of the Celtic Cask Sé you can do so by clicking right here.