Towards the end of August I was lucky enough to take part in another excellent tweet tasting which was, as usual, hosted by the wonderful Steve Rush from TheWhiskyWire.com.

The whisky on show on this particular evening was that from Girvan Grain Distillery which is situated in South Ayrshire and is a distillery which I had no previous experience of.

Set up in 1963, in an unused munitions factory, Girvan Distillery was established by William Grant and Sons as a staple source of grain whisky for blending purposes.  It boasts a highly impressive annual production capacity of 15 million litres and also is the location for a new single malt distillery called Aisla Bay.  This, however, is not Girvan's first foray into the world of single malt as back in the 60's they expanded the distillery to produce a single malt named Ladyburn but this did not last long and eventually died off around 10 years later.

As you may or may not know, grain whisky is usually produced through the use of a "Coffey" still, also known as a continuous column still, and as a result the spirit that comes off these stills can be lighter, higher in ABV and usually less flavoursome to the single malt spirit that would be produced in a pot still.

This allows the grain whisky to become very useful in the blending process by smoothing out harsher single malts whilst allowing the blenders to achieve a good consistency in nailing down the flavour profile their brand has established.

On the other hand though, as this was my first time seriously sampling grain whisky, I was wondering how these would stand up against my favourite single malts.  Surely with a lighter, less flavoursome spirit, there'd need to be some seriously impressive maturation going on? 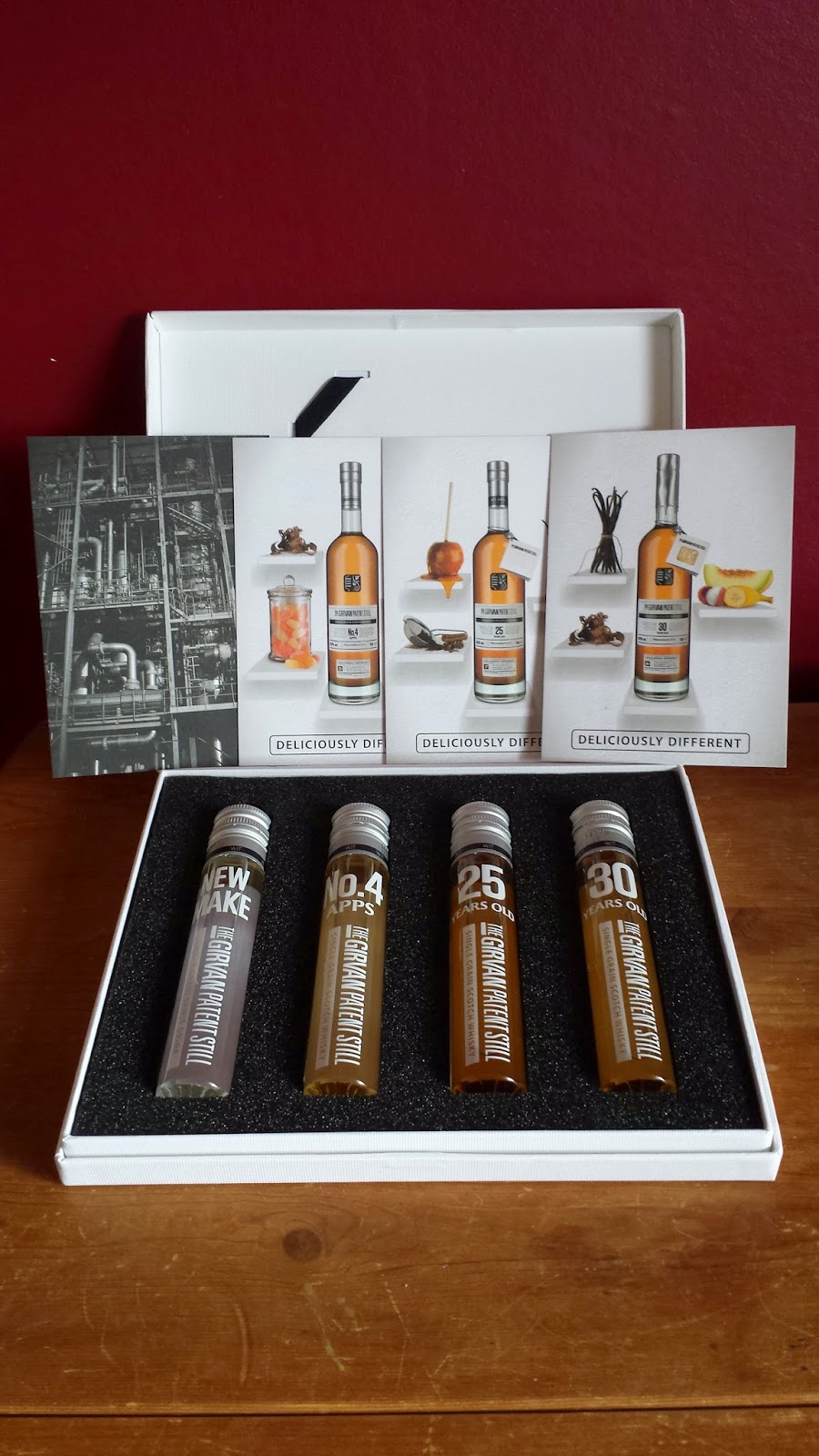 The first thing I have to say is that "The Girvan Patent Still", to give them their proper name, have got their marketing and presentation of product down to a fine art.  As you can see the samples arrived in elegant glass vials which themselves were contained within a fantastic presentation case.  This allowed one other taster to comment on how this almost felt scientific.  Certainly got my excitement levels up.

As for the samples, there were four on show.  New make, No.4 Apps, 25 year old and 30 year old.  All were bottled at 42% ABV, including the new make which was done to allow better comparison, and all were natural colour.

New Make Spirit - Normally this would come off the still at 94% ABV and, as pointed out on the accompanying taste card, this obviously can not be called whisky until matured in oak for at least three years.  The card also suggests a fresh, fruity and vibrant spirit that is a perfect starting point to show how the flavours would develop over time.

Nose - At a lighter strength the spirit is deliciously fruity, prune juice, raisin, concentrated lemon juice, white wine vinegar and a sugary / sherbety feel to it which comes across as fruit pastilles.

Whilst a great experience to try, and while I understand the reason behind bottling it at 42%, I felt that this would have benefited from being closer to 50%.  The watery, vodka-esque feel was a touch bland but there were some distinct delicious flavours in there.

No.4 Apps - In 1992 GIrvan installed a pioneering new still which they named "No.4 Apps", with "Apps" being a term for apparatus.  This new still, operated under a vacuum, permitting distillation at low temperatures.  This, according to the card, produces a pure, fruity and intense spirit.

Nose - Soft, creamy, green fruit, vanilla biscuits, perfumed and aromatic with more cereal notes.  When nosing this you get a sense that the spirit is working well with the effects of maturation.  After time the raisin returns along with a strange feel of a milk ice lolly.  Reminds me a lot of the Irish grain whiskey Greenore.

Palate - Fantastic warm fruit arrival with great strength.  Bags of oak spice.  Sweet, toffee, green apples and the lemon is now zingy and sharp.  Gorgeous spice throughout and towards the end some pepper and chilli which is not too harsh.

Finish - To be honest, slightly short, warm and drying with some more green fruit.

This for me was an excellent example of grain whisky.  Good spirit being married well with good casks and the balance wasn't too bad either.  My only complaint, and this does run throughout, is that the finish could be longer and I think this could also benefit from being bottled at a slightly higher strength.

25 Year Old - Priced around the £250 mark, this whisky has been matured in american oak and should show "notes of toffee, vanilla and caramelised fruits."

Nose - This is distinctly tropical, banana, raisin, stewed orange, red apple, light pepper with more toffee and very perfumed.  Huge sherry feel and great wood effect going on here.  Gets better and better becoming fudgy and unctuous which was perfectly described, by another taster, as sticky pudding.  After 10 minutes it's age starts to show through with a typical dustiness.

Finish - Medium in length with after notes of the palate but again the finale just feels, well, a little flat.

The standout dram of the evening.  I don't know if it's worth £250 but it certainly won the battle of the four grain samples.

30 Year Old - Distilled in 1984, this dram is unique for having maize included in the mashbill.  It is lighter in colour than the 25 year old and as pointed out age is not necessarily a guarantee of darkness of colour.  A final read of the cards would highlight "notes of vanilla, zesty fruit and woody spiced finish".

Nose - Still in the tropics, banana, pineapple, menthol, mint and vanilla toffee.  Cereal and oats.  The raisin and prune is still hiding in there but the citrus has eased off compared to the 25 year old.  More light pepper and again no initial sense of age but this comes with time along with another sherried feel.

Whilst being highly accomplished this just did not feel as good as the 25 year old and to nab this old liquid will set you back about £360.  The underlying strength issue is still here, as with all, but like I said, it is highly accomplished and worth trying.

All in all this was one amazing experience.  A great journey through the life of single grain whisky and a journey that can regularly be experienced through the likes of the tastings hosted by TheWhiskyWire.com.  I can not recommend enough to get yourselves out there and try any tastings you can, however they may be found.

As for these drams I would have to go out there and say that while the 25 year old was my favourite I'd opt for the "No.4 Apps".  I put this down purely to value for money and the fine balance that this whisky displays.

To nearly finish off I'll take a short moment to highlight that I shall be back again, very soon, with my views on the Oban 14 year old, which I had the huge enjoyment to sample whilst recently in Paris and to finally finish off I'll give a huge thanks to Girvan Grain and Steve @ TheWhiskyWire.com for yet another fine tasting.